When I moved to Australia in 1993, video calling was still something straight out of a sci-fi movie. I hadn’t thought about how I would communicate with my family and friends. There was snail mail, of course, but it could take up to three weeks to receive a letter, and by the time you replied and sent it back, over a month had passed. Anything could have happened in that time.

Phone calls to France were expensive, therefore rare. Luckily, telecommunications companies started to come up with weekend deals: call France for $20 on Sunday, unlimited time. It would often time out after a couple of hours, but even two calls at $20 each were still cheaper than normal rate.

I remember clearly talking to my mother on the phone one day, thinking, I wish video phones existed.

By the time the Internet became a necessity, to have a Facebook profile was the new “normal”, but I had already lost touch with a lot of people. I left France when I was 17, and since I was the oldest in my family on my mother’s side, some of my cousins were quite young when I moved to London.

Sometimes, I wonder what happened to my colleagues in London. What are they doing now? Where are they? Nowadays, you meet someone, and you are being asked if you have Instagram or Facebook, let me add you as a friend … wondering if you’re really friends since you’ve just met.

When Facebook became a worldwide trend, all the people from your childhood started to send friend requests. At first, it’s great. You get to see what they have become. Who are they married to? Do they have children? She must be rich if she is driving “that” car, etc. You have a little chat, catching up with the present and reminiscing the past. Then you never hear from them. The friend’s list is just a number’s game.

Thankfully, it’s not always like that. Social Networking has its pros and cons, and a different story for another time. The best part for me was to find out about  the related family I didn’t know I had, and have regular chats with.

With the Internet, video calling became a real thing, and continues to evolve with new devices. Depending on your phone plan, calling overseas is free, so now you can call without having to worry about your next phone bill or how much time the call should last. That is a thing of the past.

My parents were never technology orientated, but they had to get on board when they realised it was the easiest way and cheapest way to stay in touch primarily with their grandchildren and their daughter who are all in Australia.

NBN or Fibre is not there yet for them, and they live in a village where the Internet connection is quite bad. We were using Facebook Messenger to call, and somehow, they could never place the phone or tablet so that we could see their whole faces. Then they replaced the router, which dramatically boosted their connection, and we were able to finally have decent video calls. 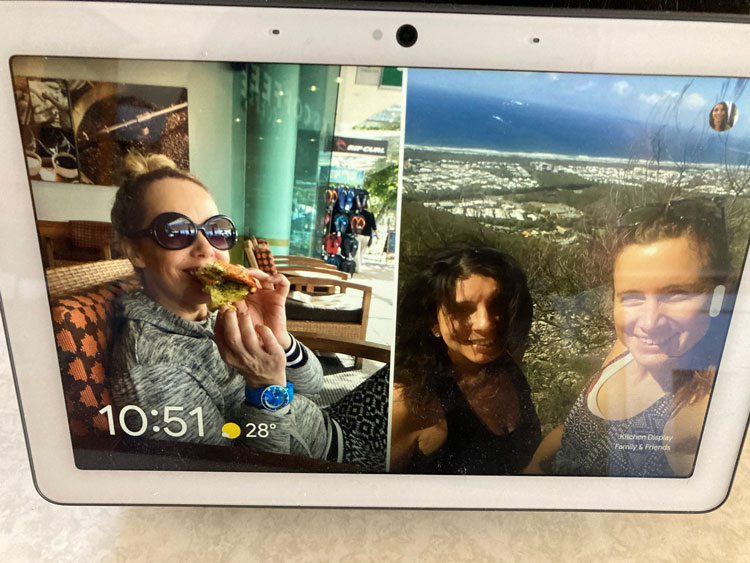 With my mother being sick, and her movements restricted, I suggested to my father that he gets a Google Nest Hub Max. I have two, so I knew what I was talking about.

My sister was the one who to get it for them. She is not technology orientated either. It took three hours, me on the phone with them, to set it up. It was quite fun, but at times frustrating … Twenty minutes before my sister realised Google Home app hadn’t installed because there was not enough free space on the phone… And don’t ask me what kind of phone, because she couldn’t tell me. I knew it wasn’t an iPhone because they had told my daughter that iPhones were for rich people…

We finally got it working, which was the main thing, but my father had to find someone more knowledgeable to add the shared Google folder to the hub display. You see, my father had told me that his son-in-law could do anything. He took fixing cars as an example. Google and cars are two different things, so my brother-in-law could not work it out, even though he may have eventually…

Anyway, now it is all working, and it is awesome. My father is so proud to have figure out how to talk to Google so she can tell him the weather or play some music. “I tell her to play me some Johnny Halliday,” he told me with a big smile.

I especially love how I can take in the whole space around him, as I’ve never been to my parents’ new house. Well, I did, but it was under construction. I can tell when it rains, snows or the sun is shining from the sliding door behind him, or even when the cat is miaowing at the door.

When we’re video calling and sometimes my father has people around, be it my mother’s nurse or therapist, family, neighbours, he can’t help to show them his Google Nest and say, “I’m talking to my daughter in Australia.”

We share a Google folder, but my father wouldn’t have a clue on how to add pictures, but he is happy to see the pictures n the display. We drip feed them, and he tells me when he sees new ones.

I have one set up in the living area which is still easy to move around as it is not cordless. The displays shows that shared Google folder where my children can add their own pictures. It also shows random photos from another Google folder of my friends. The one in my bedroom is more like my alarm clock, and I set up inspirational Google folder, because when I am in bed, I don’t really want to see my kids …

Another great thing is when one of my cousins decided to do a Group Meet with all our cousins around the world, which worked with my Google Nest Hub. The invite is sent via Google Calendar, so it knows, and Goole will add you to the meeting when asked. The camera follows you (within limits), so you don’t have to worry about positioning yourself. 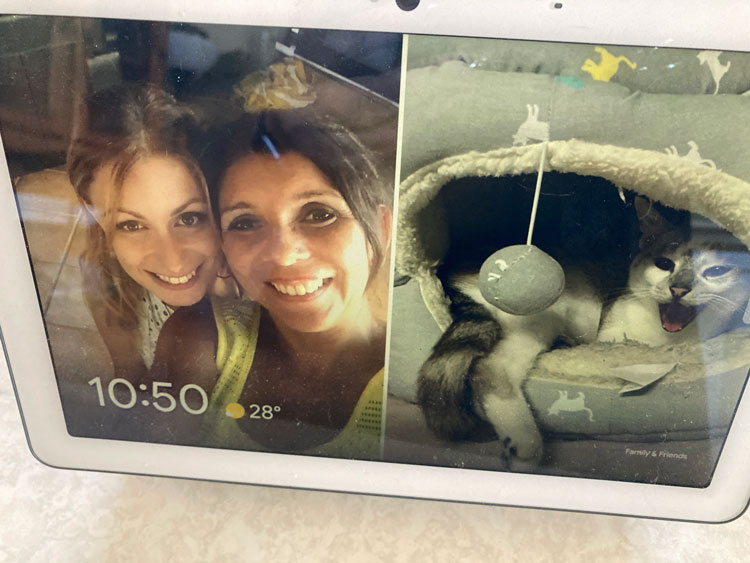 It’s not a blog post trying to sell Google Nest Hub. Amazon has a similar product, Amazon Echo; I am just not familiar with it, but I assume they have same type of  features. The only downside is that each brand only works with their own, so eventually it would be great if we didn’t have to make a choice. For now, it’s either all your family goes with Google or Amazon, although you can use Lenovo Smart Displays which works with Google Duo and Google Assistant.

Lenovo has many sizes and prices, some way cheaper than Google, but since I don’t have one, unsure how good they are.

Will Apple come out with a Smart Display for FaceTime and Siri? That would be interesting to see.

I can’t speak of Amazon devices either, but with Google, you don’t need to own the hub. It uses Google Duo which is an app for  smartphones and tablets. I have called my father on his hub from my phone and my tablet as I wasn’t home. I did notice in Google Home that you could add your Telstra account to make phone calls, which I can’t try as I don’t have an account with them.

At the end of the day, video calling from any devices is an amazing innovation, and the best way to keep in touch with loved ones. How do you stay in touch with friends and family? Care to share your experience with Lenovo or Amazon Echo?

The rise of online dating and romance scams 2020

latest in  On Lifestyle

Another assessment in 2019 for my journalism degree. That was my first END_OF_DOCUMENT_TOKEN_TO_BE_REPLACED

I can’t remember what we had to do for this university assessment, END_OF_DOCUMENT_TOKEN_TO_BE_REPLACED

Some time between 1968 and 1973 in Butsbach, Germany, a little boy END_OF_DOCUMENT_TOKEN_TO_BE_REPLACED

For many people COVID-19 lockdown has been a real struggle, and it END_OF_DOCUMENT_TOKEN_TO_BE_REPLACED